Mike Huckabee: Gingrich Ad Starring Me Is ‘Disapproved Use Of Copyrighted Material’
video

Mike Huckabee: Gingrich Ad Starring Me Is ‘Disapproved Use Of Copyrighted Material’ 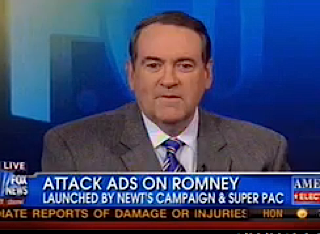 Is Mike Huckabee gearing up to send Newt Gingrich a cease and desist letter? The former Speaker used Huckabee’s likeness in a new ad, in which the latter, then running against Mitt Romney, attacked the former governor. Huckabee explained to the crew of Fox & Friends this morning that the material was from an ad that he didn’t, in good conscience, air, and that while he had not explicitly told Gingrich to knock it off, he had clearly called the ad “unauthorized, disapproved use of something that was copyrighted material.”

After playing the ad– in which Huckabee is shown saying that someone untrustworthy in the process of getting a job would also lie on the job– host Clayton Morris asked Huckabee, “your face is in there– what do you say?” Huckabee first joked that the ad’s central question about what kind of man would lie to win an election position was a waste of time: “everybody who runs for office, is the answer.” He then explained that the clip of him attacking Romney was from an ad that never aired. “My campaign produced it four years ago, when I was getting hammered by Romney– but also Ron Paul, Fred Thompson, and Tom Tancredo.”

Huckabee fell short of actually attacking Gingrich, though, instead saying that “when candidates are wanting to win the race, you use what you can do,” and that he didn’t “really care” about the ad itself, but was more concerned about people thinking he was endorsing Gingrich. “I’ve essentially said that that is an unauthorized, disapproved use of something that was copyrighted material that was never authorized for use,” he concluded. Huckabee also noted, on a different point, that he believed Gingrich not to be part of the establishment as far as not being an active member of the current Republican leadership in Congress. That said, Huckabee said that did not discount Gingrich’s experience of living in Washington for decades. The candidate he praised the most this morning? Rick Santorum, who he said was “terrific” and “at the top of his game.”