Mike Huckabee: It Would Be ‘Ridiculous’ To Protest Imams At 9/11 Ceremony 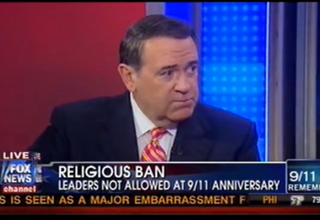 Mike Huckabee‘s weekly round at Fox & Friends this morning was far more somber than usual, as the topic of discussion naturally gravitated towards the September 11th attacks and the ceremony planned for tomorrow. Huckabee took offense at the secular nature of the ceremony, arguing that it was not “the politicians [who] were the heroes of 9/11,” but the clergy, and that anyone who would protest Muslim clerics at such a ceremony would be “inappropriate” and “ridiculous.”

Huckabee opened his comments by nothing that New York City mayor Michael Bloomberg was likely attempting not to offend anyone, “and he’s offending everybody.” The idea that September 11th “was a completely secular experience and the aftermath was absolutely devoid of anything spiritual is an insult to the very God I believe created this nation,” he declared. Given that he had evoked his own religion, the Fox & Friends crew asked whether he believed it would’ve been a problem to accept those of other faiths– namely, Islam– in such a ceremony. “You don’t think there would’ve been protests?” they asked.

“It would’ve been inappropriate to protest,” Huckabee replied, nothing that “most Muslims were horrified” at the terror attacks and that equating mainstream Islam to al-Qaeda style fundamentalism was like comparing himself to members of the Westboro Baptist Church. “Those nutcase idiots out in Kansas… they are no more Christian than I am Zeus.” In fact, more offensive than Muslims at such a ceremony, Huckabee argued, was the presence of career politicians. “The politicians were not the heroes of 9/11… they were not holding the hands and lighting the candles and saying the prayers.”