Mike Huckabee Would Vote For A Mormon ‘In A Heartbeat’: ‘It Is Not A Disqualifier’ 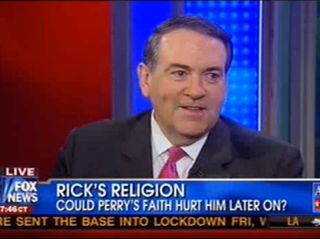 Mike Huckabee‘s faith made up a significant part of his political identity during his 2008 Republican Presidential bid, and as such Huckabee came out this morning to defend the open airing of faith by other Republican candidates this time around. Speaking to the Fox & Friends crew this morning, Huckabee said he appreciated Texas Gov. Rick Perry‘s openness with his faith, but didn’t see it as a way of “other”-ing the Mormon candidates in the field, Mitt Romney and Jon Huntsman.

“I want to know what a candidate believes,” Huckabee explained, arguing that electing a religious candidate is not the problem but “the greatest risk is to elect someone who is not honest.” He cited as extremely important “for a candidate to say, ‘here is my value system,'” and appreciated that Perry was open about this. This in turn led to the Fox & Friends hosts asking about a certain concern many had about Perry’s displays of faith: that they were intended to make his co-frontrunner, Mitt Romney‘s faith that much more unpalatable. “I think that’s an unfair comparison that people would make,” Huckabee replied about the evangelical/Mormon divide. While not mentioning Romney by name, he did say that “some of the great public servants of our day have been Mormon,” that “Jon Huntsman is a good friend of mine,” and that he, Sen. Orrin Hatch, and other Mormon leaders were so good “I’d vote for them in a heartbeat.” At least for Huckabee, one of the most prominent voices on the religious right, being a member of the Church of Jesus Christ of Latter-Day Saints, he clarified, was “not a disqualifier.”