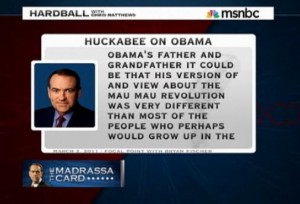 Matthews and panel do a pretty good job of calling out the race-baiting and birther dogwhistling that seems de rigeur for the 2012 crop, but I think they missed a few things.

Matthews is rightly skeptical of Huckabee’s explanation that he meant to say “Indonesia” on Monday during Bryan Fischer‘s radio show, when he said “Kenya” several times, and Boehlert correctly points out the absurdity of the claim, given the references to Kenyan history that bear no relationship to Indonesia. Huckabee didn’t misspeak.

They also delve into Huckabee’s further statements about Obama’s worldview, his thoughts about the Mau Maus, and his failure to play Little League baseball: (From MSNBC)

Matthews and company miss two key aspects of Huckabee’s dogwhistling, perhaps giving him some benefit of the doubt that they were unintentional. The first is that the term “mau mau” also doubles as a racial slur. You can look it up, but I don’t want to send traffic to any white supremacist websites.

Now, it is entirely possible that Huckabee is unaware of this double meaning, but he seems to be making a grand effort to say “Mau Mau” over and over again, even inventing an imaginary universal “American” view of the Mau Mau Revolution. Really, Governor Huckabee, what view do “most people who perhaps would grow up in the United States” think about that looming American cultural touchstone?

Intentional or not, the same pack of dogs who lapped up Huckabee’s Confederate flag rhetoric will still salivate at the sound, as they will over Huckabee’s “Little League Baseball” dividing line. As Matthews points out, basketball is actually a more quintessentially American game, as baseball owes its roots to European games. Huckabee surely knows that Obama played basketball as a youth, so why the reference? Why doesn’t basketball pass muster?

As a non-racist white guy, I’ve often found myself in the position of racial double-agent, as other white people tend to assume that all white people think the way they do. In the mid-nineties, a customer at a store that I worked in came up to me and struck up a conversation about sports and, having just met me, asked me what the difference between hockey and basketball was. I didn’t know the answer, but I was pretty sure I wasn’t going to like it.

“In hockey, nobody’s gonna fall out of a tree and take your job.”

This kind of presumption was a pretty common occurrence for me growing up, less so in recent years, as common decency has forced a lot of racism underground. But there are lots of people who long for a time when you could make “jungle bunny” jokes and not become a pariah, and they’re not all klansmen. They are the audience for Huckabee’s race-baiting.