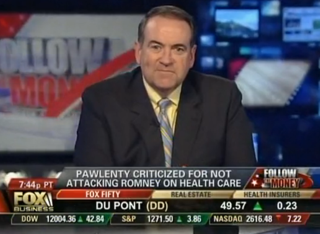 The baptism by glitter trend that began with a gay activist dumping shiny bits of paper onto Newt Gingrich was initially warmly received by almost everyone, partly due to the fact that it was perfectly timed into Newt Gingrich’s Week from Hell and also involved large amounts of glitter. By the time Code Pink hijacked the idea and went after Tim Pawlenty, however, the mood began to sour. And now Mike Huckabee is full-throatedly calling for the arrest of any and all glitterers.

The demand for justice came during last night’s Follow the Money, where Eric Bolling brought up the Pawlenty glittering and wondered whether it would prove a distraction. Huckabee argued that, sure, there would be many distractions from the issues, “from the horse race itself to things like the glittering,” and then added as an aside, “The people ought to be arrested who did that. That’s an assault.” “It’s one thing to yell at a candidate,” he argued, “you never put your hands on him, you don’t touch him. You’ve got to draw the line.”

There are several interesting elements to this demand to have the glitterers arrested. On one hand, everything you need to know about Newt Gingrich’s popularity is said in the fact that, while the entire party pointed and laughed when Gingrich got glittered, but the second one of the tiny slivers of metallic paper touched a hair on Pawlenty’s head, Huckabee called for police action (this could, of course, also speak to the lack of popularity of Code Pink, the copycat organization that targeted Pawlenty).

Then there’s the fact that neither candidate was touched by their glitter assailants, though the legal definition of battery (not assault, but no need to split hairs) requires only unlawful or offensive touching caused by the attacker, but does not require said touching to occur between the body of the attacker and that of the victim. It is difficult, however, to see the glitter attacks as battery in a criminal way given the relationship between the bodies of the attacker and victim– no one was punched or directly contacted– and the actual glitter, which touched the victims but did not quite reach the attacker. While these physical relations make no difference in the case of, say, a bullet leaving an attacker’s gun and touching a victim’s body, arguing that glitter should be held to the same standard is a difficult optical argument to make.

Either way, one could expect that if the glitter fiends get to a Republican candidate with any actual popularity– say, Michele Bachmann or Herman Cain— Huckabee won’t be the only voice crying out for justice amidst a snowstorm of fabulous rainbow confetti. And it’s entirely possible they are well aware of that.