Mike Huckabee: Rick Perry ‘Is Not Prepared For The Pressure Of The Presidential Stage’ 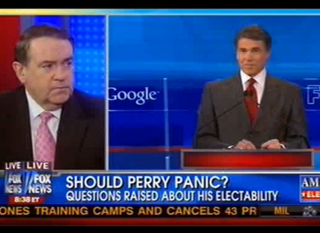 Texas governor Rick Perry‘s performance at Thursday night’s Fox News/Google debate have many conservatives second-guessing their initial enthusiasm for the candidate– particularly his stances on immigration. It was not his ideas, but his delivery that concerned Mike Huckabee this morning on his regular Fox & Friends appearance, arguing that his apparent exhaustion proved Perry “is not prepared for the pressure of the presidential stage.”

To Huckabee, Perry “looked dumbfounded” at the immigration question, which was particularly faulty given that it was a question Perry should have seen coming. The delivery and preparation, as well as the general exhaustion, led Huckabee to argue that Perry “is not prepared for the pressure of the presidential stage,” something “not atypical in a presidential election.” But beyond the exhaustion and the fact that he defied the Republican base, to Huckabee it was the argument he used to get to them that hurt him the most.

“He could’ve answered that in a way that would’ve diffused it,” he noted. Huckabee didn’t go on the attack on the issue itself, however, but explained that it was the answer that dismayed him. Instead of going for the “you don’t have a heart line,” Huckabee recommended, he could have pointed out that many illegal immigrants “pay taxes every time they buy something,” and that “we’re not talking about people who just showed up to go to college,” but children already educated in the Texas school system. With all that said, Huckabee concluded by arguing that whether or not Perry succeeded in rehabilitating himself from this attack, the idea that the Republican nomination is a “two-man race” is one that he “highly resented,” not the least due to the fact that he himself had beaten Mitt Romney at the 2008 Iowa caucus and experienced the resistance to a third contender first-hand.