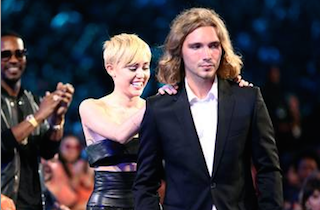 It was strange enough when Miley Cyrus sent 22-year-old homeless man Jesse Helt onstage at Sunday’s MTV Video Music Awards to accept her statue for Video of the Year and issue a PSA about the plight of runaway teens in America. Now, two days later, we’re learning that police have a warrant out for Helt in Oregon.

According to The Oregonian, Helt was arrested in 2010 for criminal mischief, criminal trespass and burglary after breaking into the home of a man who he believed sold him bad marijuana. He ended up pleading guilty and serving 30 days in jail for the misdemeanor charges plus a longer term of probation. After he violated that probation in November 2011, police issued a warrant for his arrest.

Helt, who had moved to Los Angeles and was living on the streets as he tried to find work as a model, is reportedly planning to return home to visit his mother yesterday using funds given to him by Cyrus. But when police showed up at his family’s home on Tuesday, they could not find him.

In a significant departure from the previous year’s award show, Cyrus handed over her spotlight to Helt, who accepted her award “on behalf of the 1.6 million runaways and homeless youth in the United States who are starving and lost and scared for their lives.” He added, “I know, because I am one of those people.”

Watch the clip of Helt speaking in front of millions of people on Sunday, via MTV: