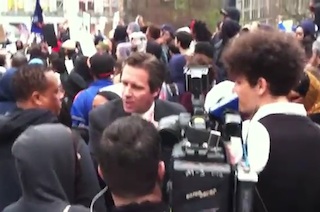 Yesterday in New York, protesters advocating for justice in the killing of Trayvon Martin organized a Million Hoodie March, gathering in Union Square while wearing hooded sweatshirts like the one shooter George Zimmerman found so “suspicious.” While there certainly weren’t a million people there, anyone could see that the number was in the hundreds. Anyone except for WCBS’s Sean Hennessy. The reporter was there to cover the protest and described the group as “a few dozen.” Unsurprisingly, the dozen or so people who were directly next to him didn’t take kindly to his seemingly creative counting.

Gothamist found this pretty ridiculous video from YouTube user FantasticBabblings who was standing next to Hennessy as he recorded his report. In it, you can watch the protesters react to Hennessy’s “few dozen” claim. They quickly begin correcting him at which point he helpfully changes his estimate to “maybe a hundred.” That doesn’t make things any better and soon people chanting that he’s a liar. The frustrated Hennessy then made perhaps the least effective response ever, sarcastically yelling back “Yep, that’s what we do. We lie. That’s what we do.”

Unfortunately, his shot was live so his original estimate aired as is. However, Hennesy’s interaction with the protesters wasn’t done. They continued accusing him of lying at which point he claimed that he was only talking about there being a few dozen literally wearing sweatshirts. Unsurprisingly, that explanation wasn’t satisfactory to the crowds.

But, watching the video now, it does seem that that is probably what he meant. However, due to his phrasing, there’s almost no chance that anyone watching at home would have realized that he wasn’t giving the full count. It’s a simple mistake but, considering how much of a powder keg this whole story is, simple mistakes just aren’t going to be passed by.

Watch the video, first the footage from YouTube and then the segment from WCBS below: