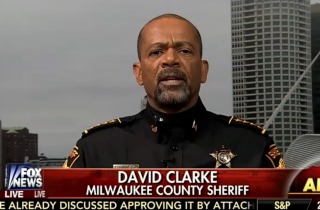 The report, which was made public on Tuesday, revealed that African-American residents of Ferguson were unfairly and disproportionately targeted and discriminated against for traffic stops, jaywalking tickets, citations, and general arrests. It also found that police officers sent a number of racially-charged emails, some of which were aimed at President Barack Obama.

Milwaukee County Sheriff David Clarke, a frequent Fox guest, told Neil Cavuto the report is just a “witch hunt” orchestrated by Holder, who Clarke says has used “inflammatory” rhetoric and went into the investigation with a “pre-determined mindset.”

“I’m not buying one word of his conclusion here, and it’s because the attorney general doesn’t have any integrity anymore,” Clarke said. “I think it’s a sad day, I really do.”

–RELATED: Megyn Kelly Loses It over Ferguson Report: ‘Hands Up, Don’t Shoot Did Not Happen!’

Clarke added he believes Holder has “animosity” and “hostility” toward local law enforcement, in particular white police officers: “He truly believes, and I believe this, that he thinks that every white police officer is a stone cold racist, and it’s just simply not true.” In addition, he said the racially-charged emails were “cherry-picked,” and that Holder ignored the other police officers “who don’t engage in that kind of disgusting banter back and forth.”