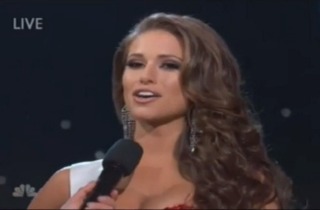 During the aforementioned beauty pageant Sunday evening, Miss USA Nia Sanchez was asked by boxer Manny Pacquiao what she would say to “global terrorists” if she were given 30 seconds with one.

“I would say, that, you know, as Miss USA, I can only say I’d spread a message of hope and love and peace,” she replied. “And so I would do my very best to spread that message to them and everyone else in the world.”

Wow. World peace. As a pageant answer. Not ironic at all. #MissUniverse

miss USA said she would try to spread love and hope to terrorists. yes, if only we would've tried offering love and peace to ISIS

#MissUniverse #MissUSA's answer was a little too ambitious! "Hope and love and peace", beautiful words but can they tackle terrorism? No!

Others mocked both the question and answer:

Yep. I'm sure ISIS would be soooo interested to hear what Miss USA has to say about their campaign of global terrorism. #MissUniverse

And the Q&A below, via NBC: