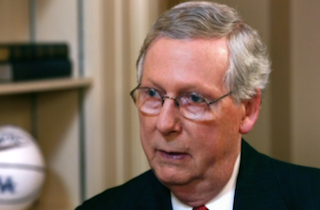 At this point, it’s fairly undeniable that Sen. Elizabeth Warren’s presence, even without entering the Democratic race for president, will push Hillary Clinton to the left on certain issues. But will that ultimately help or hurt her chances in the general election? While many progressives believe a challenge from Clinton’s left to be a good thing for the candidate, Senate Majority Leader Mitch McConnell argued in a new interview with CNBC’s John Harwood that it could end up helping Republicans.

McConnell gave President Barack Obama a rare “compliment” for “the way he took on the base, his own base last week,” referring to the president’s push on an international trade deal that failed to move forward in the Senate because of Democratic opposition. “He took on Elizabeth Warren, he took on the labor unions,” McConnell said.

“You’ve got the energy of the Elizabeth Warren faction kind of driving the agenda, pulling Hillary Clinton further to the left, which, by the way, I think is useful for us in the general election next year,” McConnell added. “The biggest divisions these days are not among Republicans but among Democrats.”

Clinton has not yet given a definitive answer one way or the other regarding her position of the trade deal, but Harwood said it should be “perfectly obvious” that “whatever she says now, she is for this deal, having promoted it as Secretary of State.”

“Energy is on the left in the Democratic Party,” McConnell reiterated. “And I don’t know what she really thinks but she’s being pulled in that direction because of her campaign for president.”