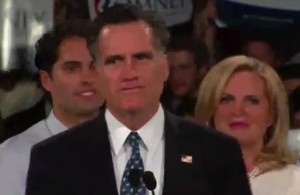 During his victory speech in New Hampshire on Tuesday night, former Massachusetts Governor Mitt Romney stuck to the script for the most part, rarely straying from the “prepared remarks” released by the campaign as the speech began. There was only one substantial change: Romney added an accusation that President Obama “wants to turn America into a European-style social welfare state,” whereas in the prepared remarks, the line read “entitlement society.”

“Remarks as prepared for delivery” are typically made available to reporters shortly before political speeches, and are often used in place of transcripts in early reporting, precisely because the speakers normally deviate very little from them. When there is a significant deviation, it can be enlightening.

In the case of Mitt Romney’s victory speech, the candidate hewed closely to the prepared remarks, adding some repetitive phrases for emphasis and a little bit of color about his family at the top of the speech, but aside from these, his only deviation was to change one line. Instead of saying that President Obama “wants to turn America into a European-style entitlement society,” he said “He wants to turn America into a European-style social welfare state.”

Here’s a clip of that portion of the speech, followed by the same passage from the prepared remarks released by the campaign:

This election is a choice between two very different destinies.

President Obama wants to “fundamentally transform” America. We want to restore America to the founding principles that made this country great.

He wants to turn America into a European-style entitlement society. We want to ensure that we remain a free and prosperous land of opportunity.

This President takes his inspiration from the capitals of Europe; we look to the cities and small towns of America.

It’s a small but significant change. It means that at the very last minute, someone (either Romney or an adviser) decided to insert that specific phrase into the speech, in hopes of gaining some kind of advantage. There are two distinct possibilities here, and they’re not mutually exclusive.

The first is that this was a Frank Luntz-style language rebranding, that Romney or an adviser felt that “entitlement society” might be a more popular phrase than they thought.

The other is that “welfare state,” while passing the Luntz test, also evokes the same sort of class-baiting “welfare queen” rhetoric that has recently begun to rear its ugly head again in remarks by Newt Gingrich about black people and food stamps, and janitorial servitude for poor urban children. In his speech, he accused the President of engaging in the “politics of envy,” but this conscious pivot arguably demonstrates a reliance on the tried and true politics of race- and class-based resentment.

Here’s a link to Romney’s full speech, as delivered, so you can compare it to the prepared remarks below:(via email from the Romney Press Shop)

Thank you, New Hampshire! Tonight, we made history!

This state has always been a special place for our family. Ann and I made a home here and we’ve filled it with great memories of our children and grandchildren. And this Granite State moment is one we will always remember.

Tonight, we celebrate. Tomorrow, we go back to work.

We remember when Barack Obama came to New Hampshire four years ago.

He promised to bring people together.

He promised to change the broken system in Washington.

He promised to improve our nation.

Those were the days of lofty promises made by a hopeful candidate. Today, we are faced with the disappointing record of a failed President. The last three years have held a lot of change, but they haven’t offered much hope.

The middle class has been crushed. Nearly 24 million of our fellow Americans are still out of work, struggling to find work, or have just stopped looking. The median income has dropped 10% in four years. Soldiers returning from the front lines are waiting in unemployment lines. Our debt is too high and our opportunities too few.

And this President wakes up every morning, looks out across America and is proud to announce, “It could be worse.”

What defines us as Americans is our unwavering conviction that we know it must be better.

That conviction guides our campaign. It has rallied millions of Americans in every corner of this country to our cause.

Over the last six months, I’ve listened to anxious voices in town meetings and visited with students and soldiers. In break rooms and living rooms, I’ve heard stories of families getting by on less, of carefully planned retirements now replaced by jobs at minimum wage. But even now, amidst the worst economy since the Great Depression, I’ve rarely heard a refrain of hopelessness.

We know that the future of this country is better than 8 or 9% unemployment.

It is better than $15 trillion in debt.

It is better than the misguided policies and broken promises of the last three years – and the failed leadership of one man.

The President has run out of ideas. Now, he’s running out of excuses. And tonight, we are asking the good people of South Carolina to join the citizens of New Hampshire and make 2012 the year he runs out of time.

President Obama wants to put free enterprise on trial. In the last few days, we have seen some desperate Republicans join forces with him. This is such a mistake for our Party and for our nation. This country already has a leader who divides us with the bitter politics of envy. We must offer an alternative vision. I stand ready to lead us down a different path, where we are lifted up by our desire to succeed, not dragged down by a resentment of success. In these difficult times, we cannot abandon the core values that define us as unique — We are One Nation, Under God.

Make no mistake, in this campaign, I will offer the American ideals of economic freedom a clear and unapologetic defense.

Our campaign is about more than replacing a President; it is about saving the soul of America. This election is a choice between two very different destinies.

President Obama wants to “fundamentally transform” America. We want to restore America to the founding principles that made this country great.

He wants to turn America into a European-style entitlement society. We want to ensure that we remain a free and prosperous land of opportunity.

This President takes his inspiration from the capitals of Europe; we look to the cities and small towns of America.

This President puts his faith in government. We put our faith in the American people.

He is making the federal government bigger, burdensome, and bloated. I will make it simpler, smaller, and smarter.

He raised the national debt. I will cut, cap, and balance the budget.

He lost our AAA credit rating; I’ll restore it.

He passed Obamacare; I’ll repeal it.

When it comes to the economy, my highest priority as President will be worrying about your job, not saving my own.

Internationally, President Obama has adopted an appeasement strategy. He believes America’s role as leader in the world is a thing of the past. I believe a strong America must – and will – lead the future.

He doesn’t see the need for overwhelming American military superiority. I will insist on a military so powerful no one would think of challenging it.

He chastises friends like Israel; I’ll stand with our friends.

He apologizes for America; I will never apologize for the greatest nation in the history of the Earth.

Our plans protect freedom and opportunity, and our blueprint is the Constitution of the United States.

The path I lay out is not one paved with ever increasing government checks and cradle-to-grave assurances that government will always be the solution. If this election is a bidding war for who can promise more benefits, then I’m not your President. You have that President today.

But if you want to make this election about restoring American greatness, then I hope you will join us.

If you believe the disappointments of the last few years are a detour, not our destiny, then I am asking for your vote.

I’m asking each of you to remember how special it is to be an American.

I want you to remember what it was like to be hopeful and excited about the future, not to dread each new headline.

I want you to remember when you spent more time dreaming about where to send your kids to college than wondering how to make it to the next paycheck.

I want you to remember when you weren’t afraid to look at your retirement savings or the price at the pump.

I want you to remember when our White House reflected the best of who we are, not the worst of what Europe has become.

That America is still out there. We still believe in that America.

This election, let’s fight for the America we love. We believe in America.

Thank you. God bless you. And God bless the United States of America.