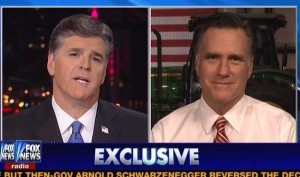 Following last night’s presidentlal debate, Mitt Romney appeared on Sean Hannity‘s show to address everything from the post-debate media reactions to President Obama‘s performance. Romney slammed the Obama campaign for engaging in blatant misrepresentation of his positions, and said he was glad to be able to set the record straight.

RELATED: Obama Takes Shots At Romney In First Post-Debate Speech: ‘That Was Not The Real Mitt Romney’

Hannity first brought up Al Gore‘s out-there theory that the altitude explains why Obama did so poorly. Romney laughed it off and instead went on the attack against the president. Romney said he was glad to have the opportunity to respond to the same claims Obama has been making about his policies for months. Hannity wondered if “overreaching” by the Obama campaign in attack ads influenced public perceptions of how well Romney did. Romney brought up how Obama said in his 2008 DNC convention speech that “if you don’t have a record to run on, you attack your opponent.”

Hannity brought up how in the past 24 hours, the Obama campaign has being going on the offensive against Romney, saying that he repeatedly lied and misrepresented his positions during the debate. Romney said it seemed like Obama was “not happy” with how he did last night, and instead is focusing on taking Romney down a few pegs.

Echoing Bill O’Reilly from earlier in the night, Hannity told Romney he found it striking that Obama never attacked his political rival over his controversial “47 percent” remarks. Romney acknowledged that he said something that “didn’t come out right, insisting that he will be a president for the “100 percent,” arguing that the gap between the rich and poor has expanded under the Obama administration.