Mitt Romney And Rick Perry Get Into Illegal Immigration Slapfight 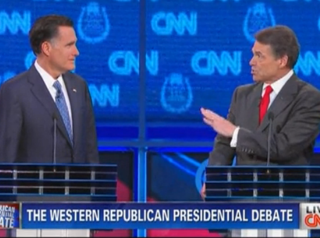 Many in the Republican Party considered tonight’s CNN debate a make-or-break event for Rick Perry, and he came out swinging against the frontrunner Mitt Romney, particularly on an issue close to the hearts of Texans, illegal immigration. In one of what would become a number of crosstalk bits where referee Anderson Cooper had to split up the fighters, there was clearly little love lost between the two from the moment Perry accused Romney of holding a position on immigration that was “the height of hypocrisy.”

While the two maintained a level of respect for each other that others did not exhibit to candidates not on the podium, it was clear from the moment that Perry turned to Romney on the relationship between illegal immigration and jobs that he meant to hit hard. “Mitt,” he began, “you lose all of your standing in my perspective for hiring illegals in your home and knowing about it for a year.” Romney laughed, apparently confused, as he concluded that this was “on its face the height of hypocrisy.” After a bit of crosstalk, Romney finally got a word in, though the word was procedural rather than substantive: “the way the rules work here is that I get sixty seconds and you get thirty seconds to respond,” he quipped. “This has been a tough couple of debate for Rick, and I understand you’re going to get testy.” Rather than swatting him away the way he did Rick Santorum previously, he retorted, “if you want to become President of the United States, you have to let people speak.”

Oh, and he did finally respond that he had no idea what Perry was talking about, before being reminded that it was a company he temporarily hired for his lawn that had hired the illegal immigrants and Romney summarily fired upon finding out. It was a risky move for Perry, but this round’s winner? Romney by a long stretch.