Mitt Romney bin Busted: ‘Candidate Like Myself’ Would Have Done Bin Laden Raid (Except 2007 Mitt)
video

Mitt Romney bin Busted: ‘Candidate Like Myself’ Would Have Done Bin Laden Raid (Except 2007 Mitt) 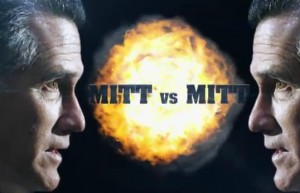 At Christmastime, it’s comforting to know that a Mitt Romney interview is the gift that keeps on giving. On Wednesday’s The Daily Rundown, host Chuck Todd drew a lot out of the candidate with his deceptively easygoing style. Todd asked Romney about the notion that “any president” would have carried out the raid that killed Osama bin Laden, and Romney said “I think other presidents and other candidates like myself would do exactly the same thing.”

Shockingly, Mitt Romney from four years ago sang a completely different tune, as did almost all of the President’s opponents at the time, Republican or Democratic.

“You said something interesting to Chris Wallace about the bin Laden decision by the President,” Todd said to Romney. “You said any president would have made that decision. What did you mean by just any president? It seemed a little whimsical. Maybe you didn’t mean it to sound that way.”

While saying he gave credit to President Obama for making the decision, Romney added, “I don’t think it’s unusual on the part of this president to have finally taken out Osama bin Laden.”

Todd, pro that he is, remembered that this exact question was a hot issue early in the 2008 campaign. “Four years ago this became a debate a issue. Do you act unilaterally in Pakistan. Are you comfortably to act unilaterally, without maybe telling an ally like Pakistan that you might be firing drones in their country?”

“I think in a setting like this one where Osama bin Laden was identified to be hiding in pakistan, that it was entirely appropriate for this president to move in and to take him out,” Romney replied, later adding that “In a similar circumstance, I think other presidents and other candidates, like myself, would do exactly the same thing.”

Keep in mind that then-Sen. Obama couldn’t have described this setting better, in 2007, than if he were Miss Cleo:

While Barack Obama’s rivals attacked him vigorously over the statement at the time, not all of them did so on the basis of opposition to unilateral action. What did Mitt Romney say then? A source from Priorities USA Action points out that he said this to Reuters at the time:

Not to worry, though. Even if Romney does manage to be elected president someday, there’s a decent chance President Obama will have killed all of the terrorists by then.