Mitt Romney Blasts Obama Foreign Policy, Lays Out His Own Plan: ‘Hope Is Not A Strategy’ 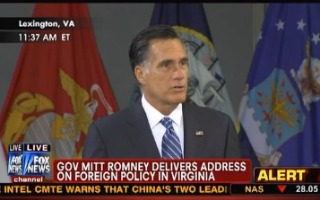 On Monday, GOP candidate Mitt Romney presented a foreign policy speech in Lexington, Virginia. He immediately touched upon the recent attacks on the American consulate in Libya, referring to these as “the deliberate work of terrorists” who use violence as a means to further their “dark ideology on others, especially on women and girls” and to “wage perpetual war:”

This is a struggle that’s now shaken the entire Middle East. It’s the struggle of millions and millions of people men and women, young and old, Muslims, Christians and nonbelievers, all of whom have had enough of the darkness. It’s a struggle for the dignity that comes with freedom and opportunity and the right to live under laws of our own making. It’s a struggle that’s been unfolded under green banners in the streets of Iran, in the public squares of Tunisia and Egypt and Yemen, and in the fights for liberty in Iraq and Afghanistan and Libya, and now in Syria. In short, it’s a struggle between liberty and tyranny, justice and oppression, hope and despair.

The culpability for the recent fatal attacks in Benghazi and elsewhere, he continued “lies solely with those who carried that out, no one else.” But, he added, “it is our responsibility and the responsibility of the president to use America’s greatest power to shape history, not to lead from behind, leaving our destiny at the mercy of events. Unfortunately, that’s exactly where we find ourselves in the Middle East under President Obama. The relationship between the President of the United States and the Prime Minister of Israel, for example, our closest ally in the region has suffered great strains. The President explicitly stated that the goal was to put daylight between the United States and Israel. And he succeeded.”

Furthermore, said Romney, the President has failed on a number of issues. He failed, for instance, to offer the “tangible support” our allies want and need, and he “tried, but he also failed” to secure a “responsible and gradual draw down,” and failed as well to “lead in Syria, where more than 30,000 men, women and children have been massacred by the Assad regime over 20 months.” In addition, Romney said, the President has failed to come up with a working strategy:

Drones and modern instruments of war are important tools in the fight, but they are no substitute for a national security strategy for the Middle East. The President is fond of saying that the tide of war is receding and I want to believe him as much as anyone else, but when we look at the at least today — with Iran closer than ever to nuclear weapons capability, with the conflict in Syria threatening to destabilize the region, and with violent extremists on the march and with an American ambassador and three others dead likely at the hands of Al Qaeda affiliates — it’s clear that the risk of conflict in the region is higher now than when the President took office. I know the President hopes for a safer, freer and more prosperous Middle East aligned with us. I share this hope. But hope is not a strategy.

We can’t support our friends and defeat enemies in the Middle East when our words are not backed up by deeds, when our defense spending is being arbitrarily and deeper cut, no trade agenda to speak of and the perception of our strategy is not one of partnership, but of passivity. The greater tragedy is missing a historic opportunity to win new friends who share our values in the Middle East. Friends who are fighting for their own futures against the violent extremists and angry mobs that seek to harm us. Unfortunately, so many of these people who could be our friends feel that our President is indifferent in their quest for freedom and dignity. As one Syrian woman put it, “We will not forget that you forgot about us.”

Romney then offered a list of promises relating to foreign policy, including working with Israel to increase military assistance and coordination, making it clear that Iran’s nuclear pursuit will “not be tolerated,” rolling back Obama’s “deep and arbitrary cuts to the national defense,” and adding more ships — including submarines — to ensure that we have a strong military whose purpose is to “prevent war.”

Romney also vowed to “make further reforms to our foreign assistance to create incentives for good governance, for free enterprise and greater trade in the Middle East and beyond” and “make it clear to recipients of our aid that in return for material support they must meet the responsibilities of every decent modern government to respect the rights of all their citizens, including women and minorities, to ensure space for civil society, a free media, political parties and an independent judiciary, and to abide by their international commitments to protect our diplomats and property.”

The former governor also pledged to champion free trade and to “restore it as a critical element as our strategy in the Middle East and across the world,” noting that President Obama “hasn’t signed one new free trade agreement in the last four years.”

In Libya, Romney vowed to support the Libyan people’s efforts to “forge a lasting government that represents all of them,” and to “vigorously pursue the terrorists who attacked our consulate in Benghazi and killed our fellow Americans.” In Egypt, Romney vowed to aid in maintaining the country’s peace with Israel. In Syria, Romney pledged to “work to identify and organize members of the opposition who share our values and then ensure they obtain the arms they need to defeat Assad’s tanks, helicopters, and fighter jets.” As for Afghanistan, Romney said he would pursue a “successful transition to Afghan security forces by the end of 2014.” Finally, he said, he would “recommit America to the goal of a prosperous Palestinian state living side by side in peace and security with Israel.”

“There is a longing for American leadership in the Middle East,” Romney concluded. “It’s not unique to that region. It’s broadly felt by America’s friends and allies in other parts of the world as well,” including Europe, Asia, and across Latin America.

“If America doesn’t lead,” he warned, “others will.”

“The 21st century can and must be an American century,” said Romney. “It began with terror and war and economic calamity. It’s our duty to steer it onto the path of freedom and peace and prosperity. The torch America carries is one of decency, and hope. It is not America’s torch alone, but it is America’s duty and honor to hold it high enough that all the world can see its light.”