Mitt Romney Brags About The ‘Empathy’ Of His Health Care Reform 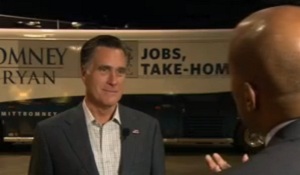 Republican presidential candidate Mitt Romney displayed several Henges worth of stones Wednesday night when he told NBC News’ Ron Allen, in an interview, that his Massachusetts health care reform law, the national version of which he has vowed to repeal on day one, is an example of how “empathetic” he is. “I got everybody in my state insured,” Romney said. “100 percent of the kids in our state have health insurance. I don’t think there’s anything that shows more empathy and care about the people of this country than that kind of record.”

That’s a bit like bragging about all the money you’ve given to the charity you’re about to sue, or how well you’ve always treated the litter of kittens you’re about to sauté. Minutes after extolling the “empathetic” qualities of his mandated health insurance law, he gave a speech in which he promised to repeal President Obama’s mandated health insurance law. Romney has taken, of late, to emphasizing the “replace” portion of “repeal and replace” because, as he just told Ron Allen, people like a great many things about health care reform, but his “replacement” plans may as well include having the NFL’s scab referees treat you. Romney would replace the preexisting conditions clause with… essentially nothing. Romney wants to replace the regulations that protect you from being thrown off of your insurance when you get sick (or have the nerve to give birth to a sick child) with… no regulations. Ryan and Romney want to replace Obamacare’s additional funding for Medicaid (which insures those kids Romney cared about when he was Governor) with drastic cuts to Medicaid. Oh, and with trips to the Emergency Room. Gov. Romney basically just called President Romney a heartless prick.

While every liberal pundit is having a field day with the breathtaking audacity of Romney’s IHOP-level flipping, it’s important to point out that not letting people die because they don’t get paid enough to afford not to die isn’t actually “empathetic,” it is the minimum standard of human decency. If you splash a few drops of Dasani on a parched, dying man’s lips, you’re not Mother Teresa.  The politics and policy surrounding health care in this country are so twisted that we forget that even the “bleeding heart” Obamacare and Romneycare solutions are poor substitutes for actual universal health care. Not letting people die doesn’t make you empathetic, it makes you barely not a prick. To paraphrase Chris Rock, “You’re not supposed to let people die, you low expectation-having mother****er!”

Elsewhere in the interview, Allen asked Romney about the recent bad polling news, and, true to form, Romney simply wished it away. “Actually the national polls, Rasmussen and Gallup have it a tied race,” Romney said. “States have numbers that are better or worse than others.”

Rasmussen does, indeed, have Romney and President Obama tied, but the Gallup daily tracking poll puts Romney six points behind.

Here’s the health care quote, from NBC News, followed by a transcript of the full interview:

RON ALLEN:
I’ve heard you say often that polls go up and down, but lately there are some polls that are very down here in Ohio — as much as ten points. And since that video tape of– about the 47 percent, is that video, and the message there, still a problem for your campaign?

MITT ROMNEY:
Actually the national polls, Rasmussen and Gallup have it a tied race. States have numbers that are better or worse than others. I don’t– I don’t worry about the polls. I worry about making sure that my message gets through to the American people and the best chance for that to happen will probably be through debates, as well as the ads that we each run over the coming– over the coming weeks. What’s going to be a very intensive time, and I’m absolutely convinced that the American people do not want four more years of the last four years, and that’s why I’ll win.

RON ALLEN:
But one thing you seem to have trouble convincing people of is that you are the person who cares about middle class people, people who are struggling — they don’t see in your background, in your comments the kind of empathy, sympathy, understanding that could really solve their problems?

MITT ROMNEY:
You know, I think people had the chance, who watched our Republican convention, to see the lives that I’ve had the chance to touch during my life, to understand that as I served as a pastor of a congregation with people of all different backgrounds and economic circumstances that I care very deeply about the American people, and people of different socio-economic circumstances. And I think throughout this campaign as well, we’ve talked about my record in Massachusetts, don’t forget — I got everybody in my state insured. 100 percent of the kids in our state have health insurance. I don’t think there’s anything that shows more empathy and care about the people of this country than that kind of record.

RON ALLEN:
And, lastly if I could, today’s all about the economy. We all know how important Ohio is. Here the economy is improving. Even the governor made that comment earlier today. So, is your message about the economy a tougher sell here where things are improving, clearly?

MITT ROMNEY:
Well, as the governor said today, Ohio is making good progress but it’s facing a heavy headwind coming from Washington, and the president’s promise to raise taxes on small business, his promise to increase massive regulations, through the pages that are coming out, through Dodd Frank, as well as policies that relate to energy here — basically saying no to coal. All of these policies will make it very difficult for Ohio to rebuild the kind of economic strength that the people in this state want.

RON ALLEN:
Can you win without winning Ohio?

MITT ROMNEY:
I’m going to win Ohio. I’m going to become the next president, in part because I’m going to have support of people in Ohio who understand we have to have coal, natural gas, wind solar, oil. We have to have manufacturing come back. I have proven that I have the capacity to get an economy going. The president has proven he does not have that skill.