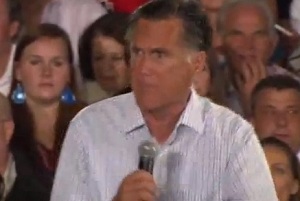 On the heels of his disastrous hidden camera video fiasco, Republican presidential candidate Mitt Romney has had to deal with the inconvenient fact, revealed in a 1962 interview with his mother, Lenore Romney, that his father was once part of the 47% of Americans that Romney now says he can’t reach. Romney showed Herb Alpert-esque brass by confronting the issue of George Romney‘s time on welfare head-on in a campaign speech Wednesday night, defending that redistribution of income even as his campaign attacks President Obama over similar remarks from 14 years ago.

Romney’s campaign has been in crisis mode ever since damning hidden camera video of a May 17 fundraiser surfaced, in which Romney effectively writes off the 47% of Americans who pay no federal income tax, singling them out as people “who are dependent upon government, who believe that they are victims, who believe the government has a responsibility to care for them, who believe that they are entitled to health care, to food, to housing, to you-name-it,” and saying it’s not his job “to worry about those people” because he’ll “never convince them they should take personal responsibility and care for their lives.”

Those remarks are problematic for a host of reasons, one of them being that, in an interview recently unearthed by Buzzfeed, Mitt Romney’s mother, Lenore Romney, reveals that Mitt’s dad, George Romney, was on welfare for years as a child:

Romney addressed his father’s time as a 47-percenter at a campaign speech in Florida Wednesday night:

Complicating matters for Gov. Romney, even if he studiously avoided using the words “welfare” and “redistribution,” is the remarkable similarity between what he said in that speech last night, and what Barack Obama said in 1998, which the Romney campaign is using to attack him. Here’s what Romney said about his dad’s time on welfare:

“I mentioned my dad, my dad was born in Mexico of Americans parents living there. At age 5 or 6 there was revolution. They came back to the United States, and my dad had to get help, financial help, the government helped his family be able to get on their feet again. By the way, that’s the way America works, we have big hearts, we care for people who have needs. We help get them back. We help lift them up, but then we don’t make that a permanent lifestyle.”

So, in short, Romney supports at least some level of income redistribution, which is what welfare is. Let’s see what that pinko Obama had to say fourteen years ago:

I actually believe in redistribution, at least at a certain level to make sure that everybody’s got a shot.

The difference, other than Romney’s refusal to use the magic words “welfare” and “redistribution,” is that Romney wants to appeal to those members of the 47% who don’t see themselves as “those people,” while stoking their resentment of “those people.” He’s saying that welfare is fine for hard-working people who just run into some bad luck, but not for “those people” who just want “free stuff” from the government. Romney’s audience doesn’t see themselves that way, but they know who he’s really talking about. “Those people.”

This isn’t a new tactic for Romney, he has drawn this distinction for a very long time, but it’s an increasingly incoherent argument. We don’t have a safety net because we have big hearts, we have a safety net because a widespread descent into poverty drags down the entire economy, and examples like Romney’s dad and former National Chairman of the Republican National Hispanic Assembly Danny Vargas demonstrate the necessity and efficacy of that safety net, even as they try to rip it down for those who come after them. In one of Romney’s lying welfare ads, Vargas explains how he grew up on welfare at a time when there were no work requirements (as there are now), but went on to be a huge success, then argues against his own success  by saying that “the problem with that is there’s been so many success stories since the welfare reform of the 90s.”

Aside from promoting the lie that President Obama is stripping the work requirement out of welfare, it also makes no sense whatsoever. Here’s a success story that happened because of welfare, but welfare is baaad.”

It’s bad because Danny Vargas and Mitt Romney got theirs, and now they want to cut the ropes for everyone behind them, because while they would be nowhere without the income redistribution that saved their families, they can’t stand the thought of “those people” reaping the same benefits.