Mitt Romney: ‘Easy To Excite The Base’ But I’m ‘Not Willing To Light My Hair On Fire’
video

Mitt Romney: ‘Easy To Excite The Base’ But I’m ‘Not Willing To Light My Hair On Fire’ 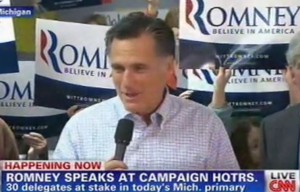 Former Massachusetts Gov. Mitt Romney is in the fight of his life in Michigan, fending off a serious challenge for victory in his home state by Rick Santorum. Speaking to reporters at his campaign headquarters today, Romney shifted from the alienating banter that has hampered him throughout his campaign, and into the misplaced honesty that has hampered him even more. He told reporters that “It’s very easy to excite the base with incendiary comments. We’ve seen throughout the campaign if you’re willing to say really outrageous things that are accusative, attacking of President Obama, that you’re going to jump up in the polls. I’m not willing to light my hair on fire to try and get support.”

Setting aside the avalanche of Mitt Romney hair jokes you’re thinking of right now (if he did set it on fire, it still wouldn’t move), this short paragraph is, potentially, very bad for Romney on several levels. First of all, there’s the casual contempt for the conservative base embodied in the statement “It’s very easy to excite the base,” the idea that GOP base voters are just a big, brainless hot-button, waiting to be rubbed the right way. As the parade of up-then-down frontrunners this season demonstrates, he’s absolutely right. Donald Trump kicked it all off with birtherism, and Rick Santorum has taken it way past the kitchen sink, attacking the President for being pro-college.

The problem, of course, is that they’re the people Romney needs to vote for him, or at least a few of them. That’s the kind of truth you don’t say out loud during a primary.

The second problem is that even your less excitable conservatives still want a candidate who will go at President Obama like a cranky Ed-209. Romney has already demonstrated his willingness to set his Republican opponents on fire, and his own positions, which only accentuates his stated unwillingness to attack President Obama in the same way. What he means is that he won’t call him “President Saddam Hitler Satan,” but what those voters are hearing is that he’s going to wuss out.

Elsewhere in the presser, Romney called out Rick Santorum’s Democrat-trolling robo-calls, saying that “there’s a real effort to kidnap our primary process, and if we want Republicans to nominate the Republican who takes on Barack Obama, I need Republicans to get out and vote, and say no to the dirty tricks of a desperate campaign.”

Later in the press conference, though, a reporter called Romney out for his own past primary mischief, saying “You have explained your own vote in Democratic primaries as a way to influence their selection of their candidate. How do you square that with what you said today?”

Romney claimed there was a difference, but hell if I can see it. “In my case, I was certainly voting against the Democrat who I thought was the person I thought would be the worst leader of our nation, in this case, as I recall, it was Bill Clinton.”

Ordinarily, I would agree with Romney about Santorum’s robo-calls (hypocrisy notwithstanding), but this election has seen far too many thumbs on the scales. In Santorum’s case, he’s being hampered by Sheldon Adelson’s constant rescuing of Newt Gingrich’s campaign. Besides, if Santorum wins Michigan in a close race, those robo-calls might provide Republicans with some cover to continue supporting Romney, placing a Roger Maris-style asterisk next to Santorum’s victory. A loss will still be devastating for Romney, but the “dirty tricks” give the establishment an excuse not to abandon Romney.

There was one moment where Romney’s honesty served him well. Asked if he was happy with the campaign, Romney showed some humanizing self-effacement, saying that “Sometimes the candidate makes mistakes, but I’m trying to do better and work harder.”