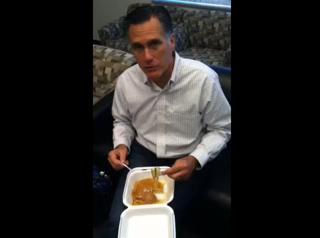 Mitt Romney‘s campaign is starting to kick in high gear, particularly on the front of making their candidate more personable. To than end, the campaign has been putting several mini-campaign videos on their websites of Romney on the road, with some perhaps unintended hilarity resulting. Take this clip, for example– a very short clip of Romney eating pancakes, explaining that he is eating pancakes, explaining the “play on words” of the restaurant’s name, and where he’s off to from here.

The pancakes, Romney notes, are from Rosemont, Illinois’ “Pancakes Eggscetera. “It’s like kind of a play on words,” he says, in case you miss the pun. “The pancakes are apparently very good.” That’s what transpires here, for most of the video:


The great thing about this video is that, because there is food and it is a one-on-one conversation, it gives one the sense that this is what Romney would be like on a date, or at a dinner. Surely the camera changes that a lot, as does the campaign trail, but in a world where “guy you can have a beer with” got a President elected– twice!– the “sitcom dad” appeal of the video carries all that much more resonance.

David Graham at The Atlantic does a good job of explaining why this short, sweet, and abrasively boring look into being Mitt Romney is so compelling, no matter how hard it tries not to be:

First, they’re “apparently” good? You’re eating them! Even better is the fact that he is that guy who explains jokes, and he does so totally deadpan. As Molly Ball has established, Romney is actually a pretty hilarious guy, but it’s not hard to see why conventional wisdom has tended to be the opposite. Rather than a peek inside Mitt the man, we get a catalog of banal moments in the long slog toward Tampa. On the other hand, the world does finally know what the notoriously self-controlled Romney cannot resist. To wit: Little-Debbie style cupcakes.