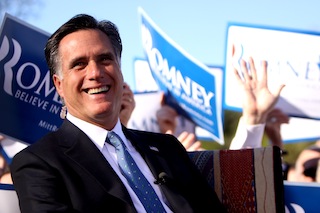 According to the filmmaker behind the new documentary Mitt, there is a part of Mitt Romney that finds being humanized via the medium of film — being relatable, allowing other humans to empathize with his plight, the very things that make man a social creature — “painful to watch.”

In an interview at the Sundance Film Festival, Mitt director Greg Whiteley told FOX411 about how he’d managed to gain unprecedented, unrestrained access to the Romney family during the campaign and what his goals were: “Audiences really get to see a certain vulnerability and weakness to Mitt,” he said, adding that he didn’t want the film to come off as “politically persuasive”.

“You look at someone like him who is wealthy, but being a part of human life you see his worries in those small moments.”

But there’s one person who found it totally uncomfortable:

Yet despite showing the former Governor of Massachusetts in a much more “human” way than the was often presented on his presidential run, Romney, who made a surprise appearance at the film’s premiere in Utah on Saturday, noted with a smile that it “wasn’t the film he would have made.”

“He said it was painful to watch, but he was touched by seeing his family and how much they really supported him,” Whiteley said.

Painful how? Painful as in, “Great, let’s re-watch the time I fell short of my life dream to become the President of the United States; this is totally not masochistic at all”? Painful as in “Oh look, my emotions are on a screen, writ large to be dissected by anyone with a Netflix account; if I were a human, I would call this ’embarrassing'”? Painful as in “There are too many colors and my retinal programming cannot handle the seizure-inducing film”?

The world may never know.