Mitt Romney Hit Obama Over Syria ‘Vacillation’ on CNN: Not His ‘Finest Hour’ 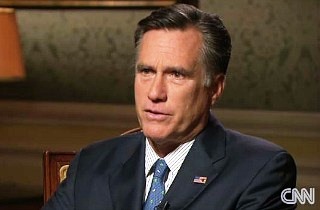 Former Republican presidential candidate Mitt Romney sat down with CNN’s Jake Tapper on Friday for a wide-ranging interview. In a clip released prior to The Lead’s Friday broadcast, Romney took a swipe at President Barack Obama over his shifting policy directed at addressing the crisis in Syria. “It was not his finest hour,” Romney said.

Romney said that the president painted himself into a corner by saying that chemical weapons use or movement represented a “red line” for the United States. However, by the time he decided to act on his insistence that a red line had been violated, both combatant parties in Syria were unpalatable allies.

Tapper asked Romney what he thought of Obama’s address to the public where he said he would go to Congress for permission to strike Syria.

“I think it was not the president’s finest hour,” Romney said. “He looked like he hadn’t thought it through and hadn’t considered the right course in advance.”

Romney said that Obama’s vacillation resulted in the loss of support from regional allies and staunch partners like Great Britain.