Mitt Romney Believes In Dirty Bombers And Open Airplane Windows, But Not In Polls
video

Mitt Romney Believes In Dirty Bombers And Open Airplane Windows, But Not In Polls 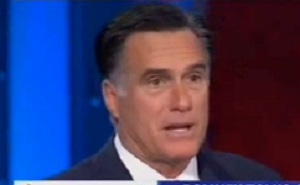 Is there no end to the things that Mitt Romney doesn’t know anything about? In just the past several days, the Republican presidential candidate has demonstrated shocking ignorance on a number of topics, some of which are crucial to the job he’s now applying for. Most recently, Romney responded to a voter at a town hall meeting, who cited a recent poll, by simply declaring that polls actually are not a legitimate way to measure public support. He can only hope.

The release, last week, of hidden camera video from a high-dollar fundraiser revealed a great many things, including that Mitt Romney doesn’t know what a dirty bomb is, and that he believes all it would take to “hold up” and “blackmail” the United States would be the ability to form the syllables “I have a dirty bomb. On your knees, America!”

He also wondered, at another megabucks fundraiser this past weekend, why the windows on airplanes don’t roll down, a remark that his campaign later said was a joke, proving that Mitt Romney knows less about telling jokes than he does about dirty bombs.

Then, on Tuesday, Romney responded to a New York City school board member and parent who cited a public opinion poll by telling the man “I don’t believe it for a second. I know something about polls, and I know you can ask questions to get any answer you want.”

Here’s video of all three events, from MSNBC:

He actually got a decent (deserved) laugh for the “I know something about polls” line, but while you could argue the individual merits of this man’s argument, Romney’s wholesale dismissal of public opinion polling as a way to measure public opinion ought to frighten anyone considering voting for Romney. He didn’t say “I don’t believe that poll,” or “I’ve seen that poll, and here are the flaws,” he simply attacked all polls (even, presumably, ones which confirm his beliefs) as the illegitimate work of conjurers.

That’s a dangerous attitude for a president to have. While presidents definitely shouldn’t govern according to public opinion polls, it’s still important for them to know what the public’s opinion is. It’s possible that, if enough people are telling you that a dirty bomb isn’t what you think it is, for example, you might want to take a few minutes to Google it, or at least to better explain why you’re allowing the country to be blackmailed by a guy with a giant cardboard box labeled “Der-tee Bom!”

Romney’s distrust of polls goes hand-in-hand with conservatism’s obsessive quest to de-legitimize the news media, because in between elections, public opinion and the Fourth Estate are really the only oversight that the people have over their leaders. Don’t like the news? It’s all “hit-jobs” and “bias.” Don’t like a poll result? It was manipulated by those commies at Fox News.

18. Who do you trust more to protect the interests of New York City public school – students, Mayor Bloomberg or the teacher’s union?

That quote Romney attributed to “the head of the teacher’s union,” by the way, is false, and was uttered by the now-retired General Counsel of the NEA, Bob Chanin. He never said “We don’t care about kids, we care about teachers,” which Romney presented as a direct quote from someone else. Chanin was addressing the NEA, and reminding them that good intentions and great ideas mean nothing without some muscle behind them:

You can quibble with his priorities if you’d like, but Bob Chanin is not the head of the teacher’s union, and he did not say “We don’t care about kids,” he said the opposite. The NEA does care about children, Chanin was saying, it’s just not why they’re effective.

Heavens to Betsy, Mitt Romney a liar? No!!! Say it ain’t so!

Barbara Walters asked President Obama if a Romney presidency would be a disaster, and the President responded that we can “survive a lot.” Here’s hoping we can get through four years without some whackjob finding a Sharpie and an ominous-looking box, or without the president needing to have the slightest idea what we think. Also, here’s hoping the windows on Air Force One are sealed up real tight.