Mitt Romney: ‘Number Of Things I Like’ In Obamacare ‘That I’m Going To Put In Place’
video

Mitt Romney: ‘Number Of Things I Like’ In Obamacare ‘That I’m Going To Put In Place’ 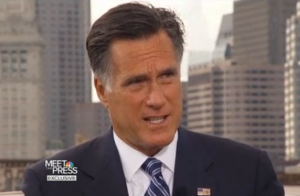 During his wide-ranging Meet the Press interview, Mitt Romney noted that while he does oppose much of President Barack Obama‘s health care reform, there are “a number of things” he likes. If elected president, he said, he wouldn’t do away with health reform altogether.

“Well, I’m not getting rid of all of healthcare reform,” said Romney, who’s repeatedly vowed to repeal the Affordable Care Act. “Of course there are a number of things that I like in health care reform that I’m going to put in place. One is to make sure that those with preexisting conditions can get coverage. Two is to assure that the marketplace allows for individuals to have policies that cover their family up to whatever age they might like.”

“I say we’re going to replace Obamacare. And I’m replacing it with my own plan,” Romney said. “And even in Massachusetts when I was governor, our plan there deals with pre-existing conditions and with young people.”

UPDATE: Later on Sunday, the Romney campaign issued a clarification about what his stance actually is regarding provisions about preexisting conditions. Per National Review, an aide said, “Governor Romney will ensure that discrimination against individuals with pre-existing conditions who maintain continuous coverage is prohibited,” referring to this remark Romney made in Florida in June:

I also want to make sure that people can’t get dropped if they have a preexisting condition. . . . So let’s say someone has been continuously insured and they develop a serious condition and let’s say they lose their job or they change jobs, they move and they go to a new place. I don’t want them to be denied insurance because they’ve got some preexisting condition. So we’re going to have to make sure that the law we replace Obamacare with assures that people who have a preexisting condition, who’ve been insured in the past are able to get insurance in the future so they don’t have to worry about that condition keeping them from getting the kind of health care they deserve.

In reference to how Romney would deal with those with young adults who want to remain on their parents’ plans, a Romney aide responded that there had been no change in Romney’s position and that “in a competitive environment, the marketplace will make available plans that include coverage for what there is demand for. He was not proposing a federal mandate to require insurance plans to offer those particular features.”