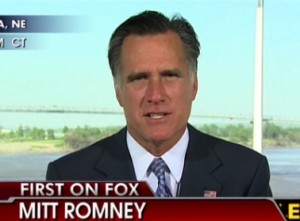 Presumptive Republican presidential nominee Mitt Romney took a break from reminding Americans of just how very anti-gay marriage/civil union he is to remind Americans how bad he is at the dozens. Fox News’ Neil Cavuto broke Romney’s chops about his lack of “cool” traits like an ability to sing, to which Romney responded by challenging the President to a sing-off. He then tried to get in a dig about President Obama’s golf habits, but the contrast was unhelpful.

Cavuto asked Gov. Romney “Does it bug you, on the campaign trail itself, that you are portrayed as just not hip, you cannot sing, you said you are not cool? The President is cool, he can sing, it almost makes me wonder whether you need a hipper, cooler running mate.”

Romney insisted, with a laugh, “Well, I think I can sing, come on.”

Romney then offered to “do a sing off,” and followed up with a popular right-wing “elitism” attack on President Obama’s avid golf hobby, but kinda blew it on the dismount.

“I don’t think I’ll play the President a round of golf,” Gov. Romney said, “but I will take him to a waterski course.”

Oh, snap! A waterski course? That’s your idea of throwing down? Is that even a real thing? Isn’t it just “the water?”

At least he didn’t try to work in the phrase “dressage horses.”

For future reference, Gov. Romney, here are some things you could challenge the President to that don’t sound more elitist than golf: darts (non-lawn, for Pete’s sake), poker, chili cookery, arm-wrestling, Ultimate Fighting,  beer pong, krumping (I would pay big bucks to see that). I hear the President isn’t a very good bowler (“No, Gov. Romney, he’s not referring to the pitcher in a cricket match…”).

Unfortunately, all the waterski courses are closed since Romney jumped the shark the other day by claiming credit for the auto industry rescue, but we here at Mediaite have put together a simulation of what a Romney vs. Obama sing-off might look like:

Yeah, maybe you ought to stick to waterskiing.

Here’s the clip, from Your World with Neil Cavuto: