Mitt Romney On Iraq War: In Hindsight ‘Obviously We Would Not Have Gone In’ 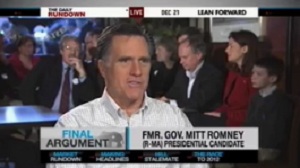 In an interview with Fox News Sunday’s Chris Wallace this past weekend, Republican presidential candidate Mitt Romney completely evaded a question about whether the invasion of Iraq was, in hindsight, a good idea. However, in an interview with The Daily Rundown‘s Chuck Todd, Romney was definitive, telling Todd “if we knew at the time of our entry into Iraq that there were no weapons of mass destruction, if somehow we had been given that information, obviously we would not have gone in.”

Todd gave Romney an out on answering the hypothetical, saying of the Wallace interview, “You wouldn’t answer the hindsight question, and I understand that. You don’t have all the information at the time.”

“But the way you answered the question,” Todd continued,  “about whether if you knew everything then that you know now, that maybe the war would have gone differently or maybe history will judge this war badly. Is that your sense on this?”

Gov. Romney, however, jumped right into the hypothetical this time. “Well, if we knew at the time of our entry into Iraq that there were no weapons of mass destruction,” Romney said, “if somehow we had been given that information, obviously we would not have gone in.”

Todd replied, “You don’t think we would have gone in?”

“Of course not,” Romney said, adding that the UN had “put forward resolutions authorizing this type of action.”

In reality, the UN did not authorize the Iraq War, and UN Secretary General Kofi Annan declared the war illegal. The US used, as its legal justification, the UN resolution authorizing the first Gulf War.

Romney’s willingness to answer the question could be an indication that he’s cognizant of the criticism that he evaded the question earlier, but his response might not please some conservatives, who advanced several other rationales for the war when it became apparent that there were no WMD.