Mitt Romney On June Jobs Report, ObamaCare: ‘By The Way, The Proof Is That I Was Right’ 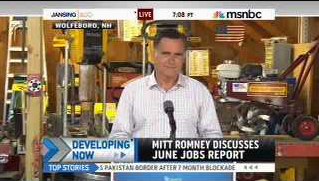 Mitt Romney addressed June’s disappointing jobs report in Wolfeboro, New Hampshire Friday morning, offering an alternate plan to the President’s and taking a moment to discuss ObamaCare’s impact on jobs and the economy. “America’s families are struggling,” he said. “There is a lot of misery in America today.”

Romney criticized Barack Obama for offering the “same old ideas of the past, that have failed,” vowing to instead “finally taking advantage of our energy resources” by creating “energy jobs.” He also promised to focus new markets for trade if elected President, paying particular attention to Latin America. In addition, the former Massachusetts governor vowed to start “cracking down on China,” and bring tax rates down in the hopes of helping businesses.

“America can do better,” he added. “And this kick in the gut has got to end.”

The candidate took several questions from reporters after his speech, including one about his criticism over Obama’s vacation time. “I’m delighted to be able to take a vacation with my family,” Romney responded. “All families appreciate the memories they have and I hope more Americans are able to take vacations. If I’m president of the United States, I will work hard to make sure we have good jobs for all Americans who is want good jobs.”

He also addressed a question regarding ObamaCare. “I have spoken about health care from the day we passed it in Massachusetts and people said, ‘Is this something you would apply at the federal level?’ and I said no,” he told reporters. “The right course is to allow states to create their own plans. By the way, the proof is I was right. ObamaCare is costing jobs in America.”