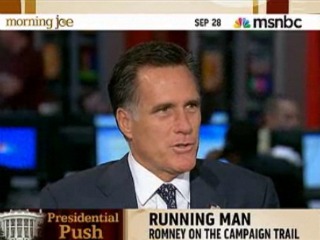 GOP presidential hopeful Mitt Romney visited the set of Morning Joe today, where he was asked whether he ever grows frustrated over the attention given to other candidates (and even potential candidates… like, say, Chris Christie) despite polling and performing consistently well. “Look, that’s your business,” said Romney, rather astutely. “Look, you’ve got to find some excitement, you’ve got to find some intrigue… And that’s part of his business, of course, which is to generate interest for him and for his campaign for re-election, ultimately in New Jersey, for his agenda in New Jersey, and who knows? Maybe he decides to get it.”

Romey added that he knows full well he could garner a quick bump in the polls by saying something outrageous and incendiary, but it’s his firm belief that, when all is said and done, voters will ultimately be drawn towards the candidate who has the best plan for, say, fixing the economy. And Romney believes he is that candidate, particularly since our current President — who may be “a nice guy” — doesn’t, as Romney puts it, understand the way the private sector works.

Speaking of Obama, Romney takes issue with the tone of his re-election campaign:

I don’t want to go around and see if we can find someone to scapegoat. And what I’m afraid of with the President’s new campaign is that it’s all about not “Are you better off than you were four years ago?” but, instead, “Is there someone we can blame? Is there someone we can attack? Can we separate the haves from the have nots?”

Romney grew most impassioned, perhaps, with his assessment of Obama as someone who has too inexperienced as a leader to successfully work across party lines — something Romney says he’s much better at accomplishing.

Take a look at the segment, courtesy of MSNBC: