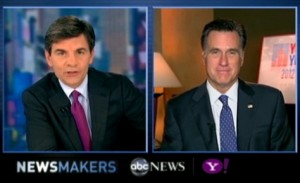 On Tuesday, influential conservative pundit Erick Erickson launched a thermonuclear attack on Mitt Romney, the steady near-leader in the GOP presidential field. In an online-only interview with ABC News’ George Stephanopoulos, Romney responded to Erickson’s criticism by saying, “I’ll let the slings and arrows come, as they may,” and by changing the subject to Barack Obama, to whom Erickson compared Romney…unfavorably. Erickson said, “As much as the American public does not like Barack Obama, they loath a man so fueled with ambition that he will say or do anything to get himself elected. Mitt Romney is that man.”

Asked if such attacks make him angry, Romney responded at length, but skirted the central premise of the criticism:(transcript via ABC News)

You know, I think people can look at my life. They can see how I live my life– at home– in– in the business I was in for 25 years, and of course, as governor, and at the Olympics. And– my record demonstrates what I believe. I also, as you know, had the chance to write a book and lay down my views on the major issues that the country’s facing.

And, you know, I understand that politics is politics, people look for some edge they can get. But– but people know how I’ve lived my life and what I believe on the major issues of the day. And frankly, I’m in this race, because of the failure of President Obama to turn around this economy. And my conviction that having spent my life in the economy, having actually created jobs, is a qualification that’s necessary for the country to get America back to work today.

So you know, I’ll– I’ll let the slings and arrows come, as they may. And continue talking about the failure of this presidency. And I know, of course, the last thing the president wants to do and his team wants to do is to talk about their record. But I’ll keep bringing it back to it. They failed.

Here’s the thing, though. I’ve been covering Mitt Romney for damn near four years now, and I honestly do not know what he believes “on the major issues of the day.” If someone put a gun to my head, and I had to guess, I would say that he probably holds somewhat moderate views on social issues (at least to the extent that government should be involved in them), is moderately hawkish on national security, and favors extremely pro-business economic policies. However, there is ample testimony from Romney to refute all of those guesses.

The point that Erick Erickson misses by tearing down Romney is that his electability turns his essential weakness into an asset for conservatives. If Romney beats Barack Obama, Republicans could also easily gain majorities in both houses of Congress, and Romney’s squishiness would make it easy for them to roll over him, and get whatever they wanted. Conservatives would be right not to trust Romney with a Democratic Congress, but a Republican-led Congress would run Romney like a prison snitch.

Where Erickson nailed it, though, was in observing that conservatives blew it when they wrote off former Utah Gov. Jon Huntsman, whose centrist patina really had the White House worried back in the day, before Huntsman’s belief in science turned him into a polling blip. With scant months to go before the voting starts, it looks like that ship has sailed.

Here’s the segment, from ABC and Yahoo! News: