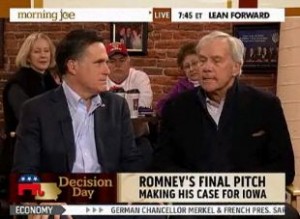 Former Massachusetts Gov. Mitt Romney has a way of making statements about class that clang like a robot mosh pit, having previously declared himself “unemployed,” and challenged rival Rick Perry to a casual $10,000 bet onstage at a debate. On Tuesday’s Morning Joe, he made his most bewildering statement yet, telling Tom Brokaw “Somebody that’s fallen from the middle class into poverty, in my opinion, is still middle class.”

Maybe this is a precursor to his new health care plan, in which he simply considers anyone who has gotten sick to still be healthy.

“Well, I want to make sure we have a safety net to care for those that are poor, but I want to get those who are poor into the middle class.

“My ambition is to make sure that we start creating jobs again in this country and that we have rising median incomes, as opposed to the 10% decline we’ve seen in the last four years.

“To get people back into work, get higher incomes, and let people have a middle-income life standard they had in the past. That’s the whole effort that I’m involved in.

“Somebody who’s fallen from the middle class to poverty, in my opinion is still middle class.”

Putting aside the fact that it’s fundamentally dishonest to blame President Obama for falling median wages during the Bush era, I’m just not sure what Romney means when he defines “middle class.” As he sees it, even if someone falls into poverty, he or she is still middle class? In what universe does that make sense?

In the one reflected in Newt Gingrich‘s space mirror?

Seriously, though, I think Gingrich might actually hold the key to Romney’s seemingly random bit of nonsense. Romney, in my view, is trying to draw a bright line between good, hard-working people who are down on their luck, and the lazy, criminal poors who have only themselves to blame. In this economy, it’s hard to demonize the poor when so much of your base is sliding into poverty, so this bit of non-logic seems designed to allow that.