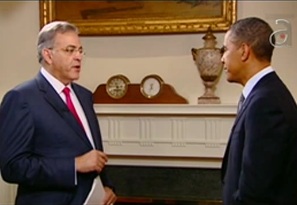 In an interview with Miami Spanish-language anchor Oscar Haza, of América TeVe, President Obama briefly addressed a question about Venezuela’s ties to Iran, saying that we need to be “vigilant,” but that “what Mr. (Hugo) Chavez has done over the last several years has not had a serious national security impact on us.”

Republicans, particularly presidential candidate Mitt Romney, are jumping all over the comment.

The President told Mr. Haza that “”We’re always concerned about Iran engaging in destabilizing activity around the globe. But overall my sense is that what Mr. Chávez has done over the last several years has not had a serious national security impact on us.”

President Obama added that “We have to vigilant. My main concern when it comes to Venezuela is having the Venezuelan people have a voice in their affairs, and that you end up ultimately having fair and free elections, which we don’t always see.”

As part of their “if Obama is for kittens, I’m against them” strategy, the Republicans pounced on the statement. Through his campaign, Mitt Romney released the following statement Wednesday afternoon:

This is a stunning and shocking comment by the President. It is disturbing to see him downplaying the threat posed to U.S. interests by a regime that openly wishes us ill. Hugo Chavez has provided safe haven to drug kingpins, encouraged regional terrorist organizations that threaten our allies like Colombia, has strengthened military ties with Iran and helped it evade sanctions, and has allowed a Hezbollah presence within his country’s borders. And he is seeking to lead – together with the Castros – a destabilizing, anti-democratic, and anti-American ‘Bolivarian Revolution’ across Latin America. President Obama’s remarks continue a pattern of weakness in his foreign policy, one that has emboldened adversaries and diminished U.S. influence in every region of the world. As president, I will speak clearly and resolutely on the challenges we face so that both our allies and our adversaries will know where we stand.

Maybe one of my conservative friends can explain to me how exhibiting peepants over a guy like Hugo Chavez equals strong foreign policy.  To be fair, Republicans have been consistent about hyping threats, but after the past ten years or so, you would think they’d have learned their lesson.

President Obama’s response should be simple, and bumper sticker-brief: “I don’t hype threats, I eliminate them.”

Here’s a clip of the President’s remark, via América TeVe: