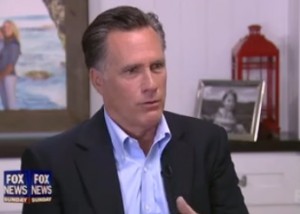 On Sunday morning’s Fox News Sunday, former future President Mitt Romney emerged from his post-election cocoon to spread his beautiful new wings, but still sounded a lot like the caterpillar who got squished by minority Santa Claus Barack Obama. In a 20 minute interview that was 21 minutes too long, Romney waxed regretful about his “unfortunate” 47% comment, but then proceeded to explain that while he “did well with the majority population,” those damn minorities were too attracted to not dying, and whatnot. I may be paraphrasing here, but only slightly.

Asked about the 47% remark that came to define his campaign, Romney said “It was a very unfortunate statement that I made. It is not what I meant,” adding, “Obviously, my whole campaign, my whole life has been devoted to helping people, all the people. All the people of the country.”

Not a minute later, though, anchor Chris Wallace asked him, “How do you rate yourself as a presidential candidate?”

“Well, I see my mistakes and I see my flaws and, I did better this time than I did the time before,” Romney joked.

Of course, getting clobbered isn’t exactly a “mistake,” as much as it is the result of mistakes. Wallace asked him what, exactly, was the mistake that Romney made?

“Well, I think the Obamacare attractiveness and feature was something we underestimated in… particularly lower incomes and, we just didn’t do as good a job at connecting with that audience as we should have.”

This is essentially the same thing he said the week after the election, when he told a conference call of donors that the President had won reelection by bribing minorities and women with “gifts” from the government, which, itself, sounded a lot like those 47% comments about greedy poor people feeling entitled to shelter and food. Maybe Romney’s biggest mistake was not waiting to run until after the Roberts court guts the Voting Rights Act.

Here’s the clip, with bonus zinger by Chris Wallace, from Fox News Sunday: