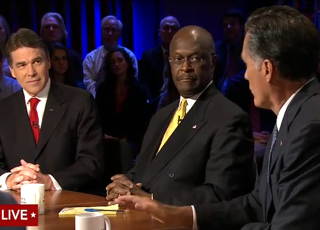 In perhaps the most interesting segment of tonight’s Bloomberg/Washington Post Republican presidential debate, moderator Charlie Rose stepped out of the debate and let the candidates shoot questions at each other. Not surprisingly, most of the question went to frontrunner Mitt Romney, and of those the most informative exchange occurred between Romney and Texas governor Rick Perry, who challenged Romney on the most contentious part of his resume: the passing of “Romneycare” in Massachusetts.

RELATED: Jon Huntsman Zings Herman Cain: ‘I Thought [9-9-9] Was The Price Of A Pizza’

Perry’s question for the frontrunner was shorter than most that went around the table, noting simply that Romney’s former economic adviser said his health care plan was Obamacare, and asking for him to “respond to the criticism of your signature legislative achievement.” While Perry wasn’t particularly aggressive in delivering the question, Romney responded in kind, happy to discuss the issue. “I’m proud of the fact that we took on a major problem in our state,” responding that Romneycare did not touch people who were already insured, while Obamacare “doesn’t just deal with the people without insurance; he tries to take care of everyone.” He then went straight at Perry, noting that, thanks to Romneycare, “we have the lowest number of kids as a percentage uninsured of any state in America– you have the highest.” Perry attempted to interject, but was cut off by the moderator, and Romney concluded his point (after shouting “I’m still speaking” at Perry a few times) that Romneycare had done his state much good, and Massachusetts overwhelmingly approves of it.

The segment via Bloomberg TV below: