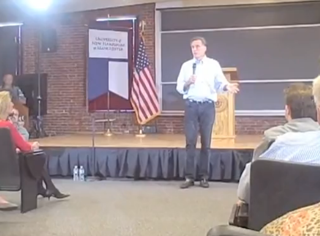 For a candidate already having trouble rallying the Republican base, Mitt Romney seems to have no fear of being labeled a RINO. Speaking at a town hall in New Hampshire, the 2012 candidate came clean with the fact that he believes in man-made global warming, and that he believes “it’s important for us to reduce our emissions of pollutants.” Between this and “Romneycare,” these are shaping out to be some rather rough primaries for the former Massachusetts governor.

Romney was discussing global warming and admitted that he “can’t prove” global warming is happening, but that he tends to believe it is real and humans have to work to stop it. While some Republican candidates allow that global warming may exist– and some, like Tim Pawlenty, used to back Cap and Trade– few specifically believe in man-made global warming, or at least don’t say so publicly:

I don’t speak for the scientific community, of course, but I believe the world’s getting warmer. I can’t prove that, but I believe based on what I read that the world is getting warmer. And number two, I believe that humans contribute to that. I don’t know how much our contribution is to that, because I know that there have been periods of greater heat and warmth in the past but I believe we contribute to that. And so I think it’s important for us to reduce our emissions of pollutants and greenhouse gases that may well be significant contributors to the climate change and the global warming that you’re seeing.

It’s a strange election year when the Republican Party’s frontrunner has a universal health care overhaul on his resume and openly starts talking about being mindful of the environment. ThinkProgress notes that his energy policies are not exactly music to the ears of actual, left-wing environmentalists– and actually support industries like domestic oil and natural gas, but adamantly calling for a reduction in greenhouse gases may be the straw that broke the camel’s back for Romney in hyper-conservative strongholds (like, say, Iowa). One could also argue he was never competitive there to begin with, however, such that this could win him very important ground among independents for the general election. In that case, these comments could be taken as evidence that, given the wide array of hopefuls that span the ideology spectrum from Rudy Giuliani to Ron Paul to Rick Santorum, Romney may already believe he will cruise through the primaries. If that’s the case, he may be in for a rude awakening.

The video (via ThinkProgress) of Romney’s comments below: