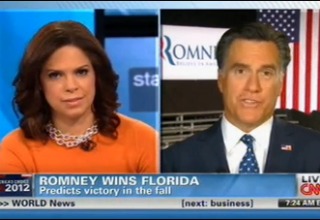 Mitt Romney, fresh off his win in Florida, appeared on Starting Point with Soledad O’Brien to discuss his strategy going forward.

At one point during the interview, O’Brien asked Romney about a recent poll that had him trailing President Barack Obama when it comes to “understanding the needs of average Americans” as well as a Washington Post column by Kathleen Parker that opined voters “can’t connect” with Romney.

Romney’s plan is to allow people to get to know him better, he said, and to focus on “the heart of America:”

RELATED: Mitt Romney: ‘Obama’s Vision Of A Free Economy Is Take Your Money And Send It To His Friends’

O’Brien asked him to clarify what he means by “not caring about the very poor,” and he reiterated that he would “repair holes” in their safety net if he sees anything that needs fixing with them.

“We will hear from the Democrat party, the plight of the poor,” he continued. “And there’s no question: it’s not good being poor, and we have a safety net to help those who are very poor. But my campaign is focused on middle income Americans.”

Watch what happened, via CNN: