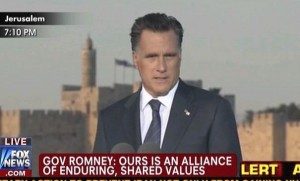 Mitt Romney spoke earlier today in Israel, continuing on his overseas tour that began in England and will conclude in Poland. Romney praised Israel’s achievements as “a wonder of the modern world” and “a tribute to “the resilience of the Israeli people,” and touted the strong relationship between Israel and the United States.

Romney said maintaining Israel’s security “is in the vital national security interest of the United States.” He took note of those who have stated publicly that they wish to wipe Israel off the map, and decried anyone who would merely brush such comments off as “excessive rhetoric.”

He said it would be “foolish” not to take the statements of Iranian leaders at their word. Romney listed many atrocities committed by Iran against its own people and other countries, declaring that “it is Iran that is the leading state sponsor of terrorism and the most destabilizing nation in the world.” Romney said that everyone should be joining the international effort to “prevent a nuclear-armed Iran.”

He dismissed containment as a viable option for Iran, making his case that those most committed to stopping a nuclear Iran are not warmongers, but “the true peacemakers.”

“History teaches with force and clarity that when the world’s most despotic regimes secure the world’s most destructive weapons, peace often gives way to oppression, to violence, or to devastating war… We must lead the effort to prevent Iran from building and possessing nuclear weapons capability. We should employ any and all measures to dissuade the Iranian regime from its nuclear course, and it is our fervent hope that diplomatic and economic measures will do so. In the final analysis, of course, no option should be excluded. We recognize Israel’s right to defend itself, and that it is right for America to stand with you.”

Romney closed his speech by saying that neither the United States nor Israel should “stand silent as those who seek to undermine Israel voice their criticisms.” He said that “by history and by conviction,” both countries are bound together, and “no individual, no nation, no world organization will pry us apart.”