Mitt Romney’s SCOTUS Reaction: What Court Didn’t Do Its Last Day, ‘I Will Do My First Day’ As President 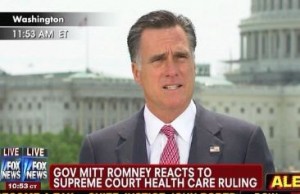 Following the Supreme Court’s ruling today that the individual mandate within the health care reform law can survive as a tax rather than a mandate, GOP presidential candidate Mitt Romney offered his reaction, addressing listeners from behind a podium decorated with a “Repeal & Replace ObamaCare” sign.

“As you might imagine, I disagree with the Supreme Court decision,” he said, promising to act to repeal ObamaCare on the first day in office if elected president:

What the Court did not do on its last day in session, I will do on my first day if elected president.

The law was “bad law yesterday” and it’s “bad law today,” said Romney, explaining that it cuts Medicare by about 500 billion dollars, increases taxes by approximately 500 billion dollars, and adds to the national debt. He also noted that, under the law, up to 20 million Americans will lose the insurance they already have and would like to keep.

Calling the law a “job killer,” Romney noted that three quarters of businesses those surveyed by the Chamber of Commerce reported that that mandate will make it more difficult for them to hire new workers. Plus, he said, ObamaCare “puts the federal government between you and your doctor.”

Romney then stressed the need to ensure that those with pre-existing conditions have their health care needs met with affordable insurance, as well as the need to decrease the cost of health care and health insurance overall.

“This is now a time for the American people to make a choice,” he said, asking voters to decide whether they want a bigger, more intrusive form of government, or to return to a time when people have the ability to choose the type of health insurance they want.

“If we want to replace ObamaCare, we have to replace President Obama,” he added, before leaving the podium without taking questions from reporters.