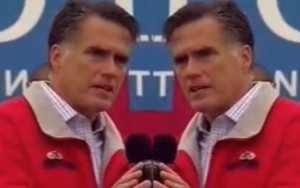 With enemies like these, who needs friends? After spending last week doing his very best to hand reelection to President Obama, Republican presidential candidate Mitt Romney spent some time today tackling a popular Republican attack against the President, the notion that the Affordable Care Act’s individual mandate amounts to a tax increase. During a speech to supporters in Ohio today, Romney told the crowd “I admit this, he has one thing he did not do in his first four years, said he’s going to do in his next four years, which is to raise taxes.”

The Romney campaign was quick to correct Mitt Romney, releasing a statement through spokeswoman Amanda Henneberg, which said “President Obama has raised taxes on millions of middle-class Americans during his first term in office,” said Romney. “Governor Romney was clearly communicating about an additional tax increase President Obama is proposing on American small businesses that will jeopardize over 700,000 jobs.”

The Romney campaign from two months ago, however, was quick to rip the present-day Romney campaign, as communications director Eric Fehrnstrom told MSNBC’s Chuck Todd that the insurance mandate “we put in place in Massachusetts is a penalty and [Romney] disagrees with the Court’s ruling that it is a tax.”

Further complicating matters, however, Fehrnstrom also told Todd that the Romney plan was never intended to be a model for the nation.

Mitt Romney from several temporal continuums blasted Fehrnstrom by saying, about every five minutes for the past decade, that his Romneycare plan should be a model for the nation, and by specifically supporting legislation that would have established a national health insurance mandate. Additionally, archaeologists have recently discovered cave drawings of Mitt Romney forcing neanderthals to buy health insurance, and film historians note that Romney can be seen in every Alfred Hitchcock movie mouthing the words “Mandates rule!”

It’s been a tough couple of weeks for Mitt Romney, but he’s still in this thing. He could help himself out a lot if he could only shut this Mitt Romney guy up.