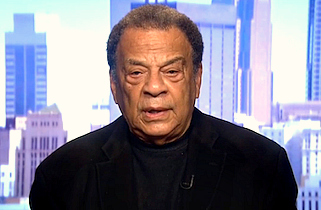 A controversy has emerged in the last two weeks around the civil rights film Selma, though not entirely the expected one, as LBJ historians and aides have criticized the film for falsely portraying President Lyndon Johnson as resistant to the idea of voting rights, and even suggested that Selma was “LBJ’s idea.” Director Ann DuVernay called the latter claim “jaw dropping and offensive.”

On Sunday morning MLK aide Andrew Young (played by André Holland in the film) told Up with Steve Kornacki that neither side had it entirely correct.

“President Johnson did not say ‘it had to wait,'” Young said. “He said, ‘I have a great agenda.’ …We did not expect him to commit. We were really kind of letting him know that we had to pursue voting rights. His agenda, I found out later, was that he thought that the Great Society…would be easier for him to bring first. If he had said that, we would probably have agreed with him. But we didn’t have a choice.”

One point on which the film appears to be on weak footing: its suggestion that LBJ ordered the FBI surveillance and harassment of King.

“That I don’t think is fair to LBJ,” Young said. “It was actually Robert Kennedy who signed the order allowing the FBI to wiretap all of us. …We knew we were bugged, but that was before LBJ.”

Young added that he recently discovered a wiretap in his house that had probably been there since the 60s.