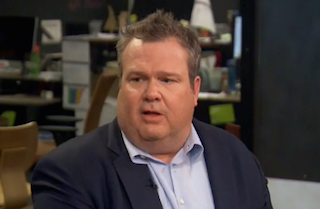 Eric Stonestreet, who plays one half of what is arguably America’s most famous fictional gay couple on the sitcom Modern Family is thrilled to count the Obamas among his many fans. But Rick Santorum? Not so much.

During an interview with HuffPost Live Wednesday, Stonestreet said he was amazed at some of the conservative politicians who have approached him wanting to take photos. When Santorum did just that at a recent White House Correspondents Dinner, Stonestreet flat out refused.

“It was at a time when he was publicly saying, ‘Gay marriage, gay marriage’ and I’m like, ‘You know, I can’t do it,'” he said. “It was with him and his kids or something like that, and I said, ‘I’d be happy to take a picture with the kids,’ but I can’t just be in a picture with [Santorum.]” He said he enjoys going to events like that one because you get to see politicians “for who they are.”

On the other hand, he was thrilled to hear from President Barack Obama that Michelle Obama and their daughters love watching Mitch and Cam and “to know we have that sort of reach with people and that the people in power and leadership are watching the show.”

“I do think that we are having an impact,” Stonestreet said of Modern Family’s efforts at “normalizing” what it is to be a same-sex couple. Most importantly, he said it gives kids who are bullied characters to point to and look up to, who are both gay and having a fulfilling, “normal” life.