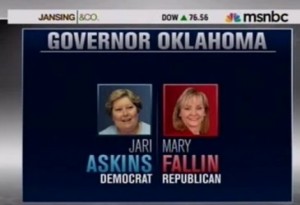 Maybe this is what happens when you say you’re looking for an OK governor.

While the gender-based political attack du jour deals with the sowing end of the seed spectrum, maternity has suddenly become fertile ground for at least one candidate. At an Oklahoma gubernatorial debate last week, Rep. Mary Fallin (R-OK) touted her 6-0 childrearing advantage over opponent Lt. Governor Jari Askins (D-OK), causing cries of “Low blow!” to come sweeping down the plain. Asked what distinguished her from Askins as a candidate, Fallin replied “I think my experience is one of the things that sets me apart as a candidate for governor. First of all, being a mother, having children, raising a family.”

Askins appeared on MSNBC this morning to give her reaction.Speaking via the worst Skype connection ever, Askins points out that Fallin runs the risk of alienating many competent non-moms:

Unless she’s running on a platform that includes a Gogurt in every knapsack, it is difficult to see how the size of Fallin’s brood relates to her qualification for office. Emphasizing the importance of family is nothing new in politics, but drawing such a direct contrast with an opponent puts this firmly into the “mean girls” meme that has emerged during this election cycle.

Before conservatives rush to defend Fallin, and before liberal outrage reaches too high a pitch, it’s important to remember that this shoe was once on the foot of another prominent female politician. Early in the 2008 general election, vice presidential nominee and self-styled “Mama Grizzly” Sarah Palin faced attacks on her parenting skills from the likes of MSNBC’s Ed Schultz.

The takeaway here, then, ought to be that we should try to keep our political discourse above the belt. This latest iteration of gender politics is uncomfortable, to say the least, but it could still get worse. If races between male candidates become siring contests, look out, world. A John Edwards comeback can’t be far behind.