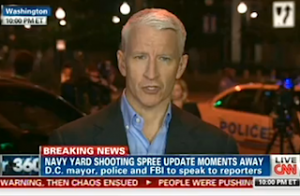 Anderson Cooper’s wall-to-wall coverage of the Navy Yard shooting during the 10pm hour Monday night had the most viewers in the 25-54 demo with 322K. Fox’s Greta Van Susteren was second with 303K and MSNBC’s Lawrence O’Donnell was third with 148K.

In total viewers, Cooper beat everyone accept Fox, with a higher than average 915K. Van Susteren was first was 1.350M total viewers, while again MSNBC’s O’Donnell was third with 559K.