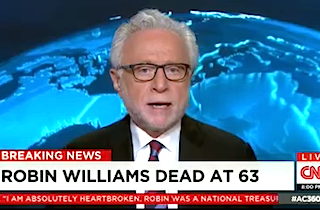 Not only did Erin Burnett Out Front (with guest host Don Lemon) beat Fox News’ On the Record with Greta Van Susteren in the 25-54 demo, but the network’s Wolf Blitzer-hosted special coverage at 8 p.m. also beat perennial front-runner Bill O’Reilly in the demo as well. Unlike Blitzer, who stayed on the Williams story non-stop, O’Reilly discussed it briefly at the top of his show before moving onto other news stories.

Fox News regained the demo lead at 9 p.m., but even after they put in Shepard Smith to replace Hannity with special coverage of Williams at 10 p.m., they could not beat CNN Tonight. CNN came close to beating Fox News overall in the primetime demo with an average 568K viewers compared to Fox’s 574K. MSNBC trailed far behind with 180K.

Fox’s lineup remained in first place when it came to total viewers, averaging 2.394M in primetime. But with 1.425M in primetime, CNN was up nearly 300% from the previous Monday. Again, MSNBC was third with 761K.