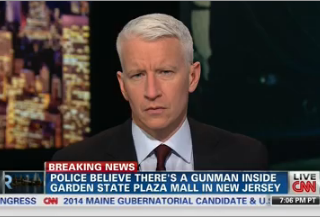 While CNN trailed MSNBC overall Monday night, the network’s numbers did increase during the 10pm when breaking news hit about a shooting incident at New Jersey’s Garden State Plaza. With 149K in the 25-54 demo CNN’s Anderson Cooper led MSNBC’s Lawrence O’Donnell, who had 135K. Fox’s Sean Hannity won the hour with 313K in the demo.