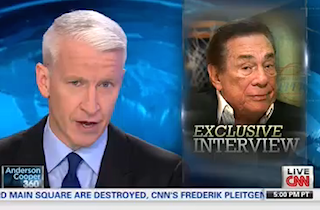 Anderson Cooper’s exclusive interview with L.A. Clippers owner Donald Sterling helped give CNN a major ratings boost Monday night, with the 8 p.m. hour hitting 294K in the 25-54 demo and 720K total viewers. That was a 73% jump in the demo and a 42% jump in total viewers for Anderson Cooper 360 compared to the previous four week average.