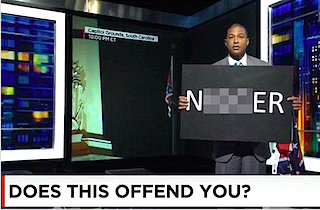 On the night he held up an uncensored sign with the “n-word” on it, Don Lemon’s CNN Tonight was the highest rated show in the 25-54 demo across both CNN and MSNBC with 188K viewers. During the 10 p.m. time slot, Fox News’ Hannity was #1 with 272K and MSNBC’s The Last Word with Lawrence O’Donnell was third with 168K.