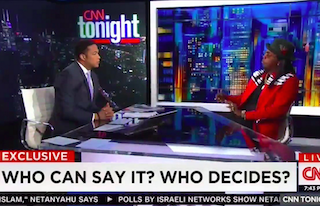 Monday night, Don Lemon hosted yet another special report on the “n-word,” an in the process drew the most viewers of any show across CNN’s primetime lineup. Lemon’s CNN Tonight had 212K viewers in the 25-54 demo and 494K total viewers, beating out Anderson Cooper 360 and a special on the Aaron Hernandez trial.

In the demo, CNN’s 10 p.m. hour also rated higher than every show that aired across MSNBC’s lineup Monday. The show came in second place to Fox News’ Hannity in its time slot.