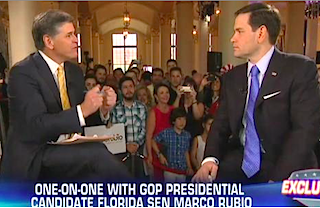 Sean Hannity conducted an “exclusive” interview with Sen. Marco Rubio (R-FL), following the candidate’s announcement that he is running for president in 2016, and was rewarded with the #2 spot in the 25-54 demo ratings for all of cable news.

The 10 p.m. program averaged 331K in the demo, trailing only The O’Reilly Factor (421K) and beating The Kelly File (320K). However, in total viewers, Hannity had just 1.311M, falling behind not only Bill O’Reilly and Megyn Kelly but also The Five, Special Report with Bret Baier and On the Record with Greta Van Susteren.