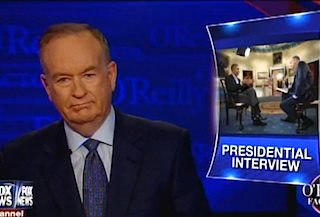 The continuation of Bill O’Reilly’s pre-Super Bowl interview with President Barack Obama drew a strong 626K viewers in the 25-54 demo and 4.204M total viewers to Fox’s The O’Reilly Factor, making it the most-watched show on cable news Monday night.

The strong lead-in did not help Fox’s The Kelly File as much as one would have expected, especially in the demo. The Rachel Maddow Show was #1 in the demo at 9pm with 472K, ahead of Megyn Kelly with 372K. Kelly did come out ahead in total viewers with 2.686M to Maddow’s 1.367M.