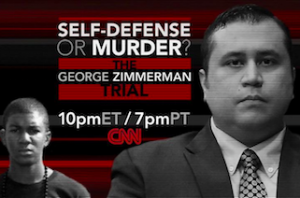 CNN debuted a new hour-long special titled Self-Defense or Murder? The George Zimmerman Trial hosted by Anderson Cooper last night. Scheduled to run every day this week at 10pm, the new show beat MSNBC’s The Last Word with Lawrence O’Donnell in the 25-54 demo. Cooper’s special had 190K viewers in the demo while Lawrence O’Donnell‘s regular program had 124K.